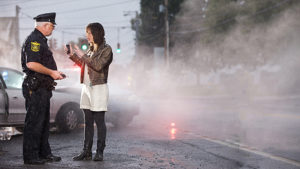 Lawmakers in a handful of cities and states – Nevada, New York, New Jersey, Tennessee and the city of Chicago – are considering allowing police to use devices called textalyzers to test for suspected cell phone use at the scene of car accidents.

A textalyzer device can provide on-the-spot analysis for text messaging or phone use. The technology is being promoted as a means of reducing distracted driving. The proposed legislation would create an “implied consent” by drivers for searches utilizing textalyzers, similar to procedures that allow breathalyzer testing for drivers suspected of driving under the influence. With implied consent, drivers are considered to have consented to a breath test simply by operating a vehicle on a public road – no search warrant necessary. Similarly, the textalyzer device would be connected to the driver’s cell phone and would scan the phone for calls, emails or text messages sent when the driver was operating the vehicle.

Privacy advocates, however, contend that law enforcement should not be allowed to use the tool without a warrant due to concerns that it would violate Fourth Amendment protections against unreasonable search and seizure and raise privacy questions:

If you suspect you’re sharing the road with a distracted driver, experts suggest giving the driver a wide berth by pulling ahead or slowing down and letting them pull ahead. If you can’t get away from the driver, call 911 to report your concern.

No matter what your state law is, it’s smart to be on the lookout for distracted drivers and to be aware of potential new technologies and legislation that may affect your privacy rights.

The Distraction.gov website offers downloadable resources to assist in awareness campaigns for the general public and the workplace. Sample programs are available for employers, and other materials offer ways for community groups to get involved.

This loss control information is advisory only. The author assumes no responsibility for management or control of loss control activities. Not all exposures are identified in this article. Contact your local, independent insurance agent for coverage advice and policy service.