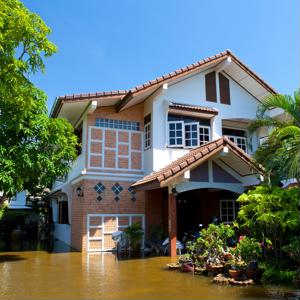 For spring and summertime enthusiasts, this is one of the more enjoyable times of the year, as there are plenty of days to look forward to in which the warmth outside makes for fun in the sun. However, while the melting snow may be Mother Nature’s way of preparing the earth for the summer solstice, this is also a point on the calendar in which flooding is more likely to take place – so it’s important to be prepared.

First and foremost, consumers need to know that most homeowner insurance policies do not provide protection from flooding and that a flood insurance policy typically takes up to 30 days to go into effect…So don’t wait until it’s too late.

In addition, the Property Casualty Insurers Association of America offered some tips to homeowners so that flooding doesn’t necessarily have to be a problem.

“We generally see this every spring, where the ground is still frozen and the melting snow runs into nearby lakes, streams and roads causing areas to flood,” said Chris Hackett, director of personal lines for PCI. “While flood damage is covered by flood insurance, which is bought as a separate policy through the National Flood Insurance Program, PCI reminds citizens that insurers are on hand to answer questions and help families and businesses quickly resolve problems, file claims and begin the process of recovering from these events.”

Perhaps the biggest threat to damage emanating from a flood is the basement, seeing as how it’s typically the lowest portion of the home. Should the cellar experience the effects of it, water should be pumped out gradually rather than all at once in order to stave off structural damage. Depending on how bad the flood was, about a third of the water should be removed every 24 hours or so.

PCI had several other recommendations to be mindful of during flooding season.

The average flood insurance payout last year for those who filed a claim was roughly $22,400 between March and June, according to the Federal Emergency Management Agency. Claim payments peaked, however, in October, averaging approximately $40,900.