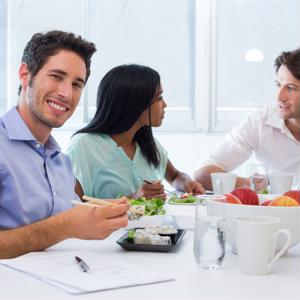 Americans around the country are in the midst of personal campaigns to get themselves just a little bit healthier than they were last year. Whether it’s losing a few pounds or finally kicking that bad habit once and for all, a life centered on good well-being is something that everyone can take advantage of – even though it might be easier said than done.

But establishing a health-based mindset isn’t solely for the individual, because the same advantages come when a culture of wholesomeness and vigorousness comes to the office place.

Literally billions of dollars in work productivity is lost each year due to illness and injuries. For instance, in 2013, the total estimated lifetime medical and work loss costs associated with sickness and injury was north of $671 billion, according to the U.S. Centers for Disease Control and Prevention. Additionally, it’s estimated that 50,000 fatal workplace injuries and 400,000 nonfatal workplace illnesses take place per year, based on estimates from the National Safety Council.

The fact of the matter is, when staff are in good shape – both physically and mentally – positive results naturally follow. The key to bringing these benefits to your workplace is creating a system that everyone can use to improve themselves, along with some added perks that can serve as motivation. Here are five ideas to include in your workplace wellness program:

1. Encourage prevention
When the temperatures plunge and stocking hats make their first appearance of the season, you know that colds and influenza can’t be far behind. Millions of people are stricken with the flu bug year in and year out, but what isn’t nearly as common are the steps that can be taken to reduce the risk of catching the contagion. None is more effective than getting a flu shot, according to medical experts. Yet despite this, one-third of adults don’t think a flu shot is worth their while, based on a poll done late last year by Harris Interactive. With the flu vaccines first coming out in October, do whatever you have to in order to remind your workers to get themselves vaccinated – for their own sake and the office’s.

2. Instruct sick workers to stay home
There’s something to be said for employees who are so committed to their job, they’ll endure illness just to get their work accomplished. While this kind of devotion is laudable, overdoing it when under the weather puts other workers in jeopardy. Yet more than half of food workers say that they’ve come to work before despite being sick, according to a recent poll. Don’t risk another illness and remind workers who aren’t feeling well to call out sick.

3. Set up a smoking cessation program
There’s no denying that the poor health effects of tobacco use are real, dangerous and dramatically increase the risk of various forms of cancer, like lung and throat. Furthermore, the smoking breaks that workers take are productivity killers. Nearly 30% of business owners in a recent poll cited time out for a butt as their biggest productivity pet peeve. Establishing a smoking cessation program may be the vehicle you need that gets workers to stamp out their deadly habit for good.

4. Get moving
Nutritionists agree: The quickest way to a body that’s fit as a fiddle is through a combination of diet and exercise. However, many people don’t think they need to modify their well-being habits. For instance, a recent poll conducted by the International Food Information Council Foundation found that 57% of Americans rate their health as “very good,” or “excellent.” At the same time, though, 55% of this same group are overweight or obese.

Encourage your workers to get at least 60 minutes per day of moderate to intense exercise. Fewer sick days and a greater sense of self-confidence will be their reward.

5. Sleep matters
“With so much work to do, who has time to sleep?” is the refrain from the perpetually sleep deprived. The problem is that operating on too little sleep is a practice of diminishing returns, preventing the body – and mind – from the recovery and repair that can only take place through quality slumber. According to sleep experts at the American Academy of Sleep Medicine and Sleep Research Society, adults should aim for a minimum of seven hours of shuteye per night.

“More than a third of the population is not getting enough sleep, so the focus needs to be on achieving the recommended minimum hours of nightly sleep,” said Nathaniel Watson, M.D., AASM president. “Long sleep duration is more likely to reflect chronic illness than to cause it, and few experimental laboratory studies have examined the health effects of long sleep duration.”

A workplace that’s as healthy as a horse still needs the appropriate backstop for those cases where employees are out of work for a prolonged period. For information on workers compensation and group health insurance insurance, contact RC4 Insurance Agency, LLC today!