Skip to the content
Home > Insurance Blog > No Smoking At Work: Is It Legal?

No Smoking At Work: Is It Legal? 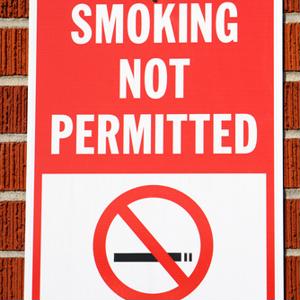 The adverse health effects of smoking are real and undeniable. Every year, in excess of 480,000 Americans die from tobacco use and secondhand smoke, according to the American Lung Association. Smoking dramatically increases the risk of lung cancer diagnosis and is responsible for a bevy of unwanted side-effects, like yellowing of teeth, difficulty breathing, bronchial infections and a host of other issues. It’s these harmful health symptoms that lead to an estimated $170 billion in direct medical care for adults alone and $156 billion in lost work productivity, based on figures from the U.S. Center for Disease Control and Prevention.

With circumstances like these, you can understand why many business owners have a no smoking on premises policy, requiring workers who light up to take their business outdoors.

The question becomes, then, is it legal for employers to bar employees from lighting up? The answer to that question largely depends on the state businesses are established in.

Roughly half of the U.S. – including states like Massachusetts, Pennsylvania, Ohio and Georgia – permit employers to ban workers from smoking on the job. However, there are caveats built within these rules, many of which aren’t the same in all states that have enacted workplace smoking bans. For example, in some states, employers must provide a place for their staff to smoke. In others, meanwhile, a 100% ban is within the bounds of legality.

Smokers’ rights can’t be infringed in several states
This isn’t the case everywhere, though. Organizations like the American Civil Liberties Union and the Equal Employment Opportunity Commission have led efforts that grant smokers certain privileges. These rights also pertain to hiring, as denying a jobseeker a position because they smoke is considered discriminatory in some states and municipalities. Not promoting someone to a higher position because they smoke may be considered prejudicial as well. In a recent poll conducted by CareerBuilder, approximately 1 in 5 business owners admitted that workers who took frequent smoke breaks made them less likely to appoint them to a more prominent role.

As is so often the case, where the law comes down on workplace smoke bans is a state issue. The Society for Human Resources Management has an online resource that outlines what states have enacted smoking bans in public areas, including places of employment. It also contains information on what qualifies as a public place.

Smoking leading cause of fire deaths in U.S.
Smoking not only has long-term health risks but also the more immediate kind. Smoking materials, such as cigarettes, cigars and pipes, are the leading cause of fire deaths in the United States, according to the National Fire Protection Association. As recently as 2011, fire departments responded to more than 90,000 fire emergencies that were started by tobacco-related products.